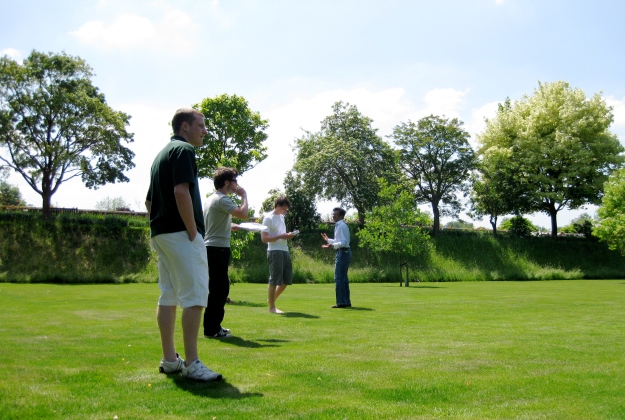 We are rehearsing. It’s good. Our cast is somewhat reshuffled and now complete – we’ve welcomed Martha May as the Princess, and Dan McLean as Longaville. I’m sorrier than I can say to see Rob and Ellen go (nothing sinister – work and family commitments) but the new people are great and it’s good to be a secure company. Merton & Oriel are especially well-represented – the latter provides myself, Rebecca Tay as Jacquenetta and Dan McLean. The last two are both JCR Theologians, for added crossover.

The weather, too, is glorious; the pastier amongst us (…that’d be Ed and I) are swooning slightly in the heat, but I wouldn’t miss the chance to rehearse in the space. When I directed the Oriel Garden Show, two years ago, we were lucky enough to rehearse in the quad for a good three weeks or so; now, college red-tape seems to make everything a lot trickier. Thank God Merton is so huge – we’re a long way from any rooms, and the one eye-witness report (my friend Jodie saying ‘this isn’t meant to sound creepy, but I think I watched your rehearsal’) suggested our spectator actually enjoys the sound of a bit of Shakepseare in the afternoons.

I’m playing Moth. No, not the fairy. The page. The small, compulsively clever, unstoppable show-off and occasionally vicious little brat to whose canonical characteristics Krishna and I seem to have added mild hyperactivity. I never stand still. Except on the bench (our sole bit of set!). Moth is the page and comic foil to Don Armado, the Spanish lover-and-or-fighter who brings chaos to the court of Navarre. And he never shuts up. At the moment I think Moth’s about 13-14; a good choice for a page, and, obviously, any boy I’m playing can’t be too mature or adolescent. He’s crueller than I originally thought; the cross-casting of Holofernes and Nathaniel (Ellen Davnall and Eleanor Lischka) means that when he mocks them, it’s a young teenage boy having a nasty go at two old women; different resonances to the usual schoolboy/pantaloon clash. He also has more of an arc than I’d expected – we see him meet & develop a friendship with Costard (Phil Aherne). These notes could become tediously detailed, but one thing that’s really coming out is that not only (as K points out) is he almost always the teacher in what should be a reversed pupil/teacher relationship), but he has more natural authority; in a scene where Armado has to imprison Costard, it’s Moth who actually takes him off to prison, with far less fuss. I imagine him a bit like one of the Magdalen/New College schoolboys you see walking through town all the time.

I must admit that I’m already having the occasional shiver of stage fright. It’s such a long time since I acted, especially acted-without-also-directing, and the usual formula that having directed plays (the biggest possible stress) cured my stagefright (acting = relatively unterrifying) has gone. Gone. I’m worried I’m too old, curvy, female, high-pitched, quiet and clumsy for this part. But then, all the scampering and running I’m doing has gone pretty well so far, although there’s one weird little bit of dancing that (while v effective) is already a possible source of nerves. I have no idea where to practice it – my room doesn’t give me enough of a run-up, and jigging about in the corridors could be interpreted as psychological warfare enacted on my neighbours. Equally, doing it outside (presumably after dark) might easily give rises to suspicions of a satanic rite. Oh the vicississitudes of my life.

Lots of movement is definitely the way to go – not only because Moth has some incredibly wordy speeches to deliver (fortunately my forays into Latin are v brief), but because of the one helpful fact I’ve gleaned from neurotic academic scrabbling through Love’s Labour’s Lost‘s stage history. Well, no, there are two. The first is that the play was written as am-dram, for lawyers, to be performed in the Inner Temple. Hence, you might say, all the Latin and loquacity, and leave it at that. IN FACT, the legal profession clearly have the filthiest minds of those alive today – the play, so sweetly beautiful at the RSC, is actually pure filth. We discovered this at the readthrough. You can get a lot of mileage from the word ‘fructify’. Collapse of cast.

Anyway, my one useful fact is that, in the nineteenth and twentieth centuries, the play has often been staged in a double-bill with The Tempest and, in such cases, Moth usually doubles Ariel.

So as far as movement goes, we’re probably on the right track, then.

Obviously, the rehearsal period is going to get extremely intense between now and our 19 June opening, but that’ll be no change for our cast – 15 of us were in plays in 5th week, a couple more have productions in 6th, and two of us (Ed and myself, fortunately) have Masters dissertations to hand in, four days before we open! Oh, and Phil and James just did finals or something. Whatevs. And everybody else seems to do a lot of rowing (cue lycra, muscles, and plenty of people to finally explain what ‘rowed on’ means – I know, it’s terrible).

Before show week, though, we have workshops oh yes. Propeller is coming to work with us (I AM SO PATHETICALLY EXCITED ABOUT THIS) during their week in Oxford, we’ll be learning ballroom dancing and also choral singing (this last in preparation for the final scene). I think we’re quite a musical cast – although obviously Rebecca has been doing musical theatre all through Oxford – so that should be fun. Workshops seem to be the latest thespy vogue, along with 1) experimental theatre in the O’Reilly (which seems to have edged out Hertford Bop Cellar as Top Place To Wear Leggings In) and 2) thespian blogs. Er. Whoops. I am all in favour; training is such an important part of rehearsals, particularly for student actors who want to turn professional, but for whom having a first degree makes subsequent training much more expensive (and thus necessarily shorter). Obviously nothing we do here can replace drama school training (even Sian [Robins-Grace] who went from Oxford to the RSC in a matter of months had done BADA etc. in the holidays) for actors, but every little helps.

But yes. We are rehearsing. It’s good.

P.S. Another lesson I am learning from rehearsals – do not look scared and horrified when a co-actor (Michaël, in fact) tells you he reads your blog every day. This is good. This is why you’re writing. You want this to happen (LLL cast, hi!).