WIFE: Why is that, my love?

ME: [Emotional] Because 1888 is my favourite Victorian year.

1888 is my favourite Victorian year because it combines Ellen Terry’s Lady Macbeth, the stage version of Strange Case of Dr Jekyll and Mr Hyde, and the Whitechapel killings. You are probably wondering why this is Christmassy. Macbeth opened on 29 December 1888, with coverage boosted by the traditionally slow news week between Christmas and New Year, and the feverish public interest – amounting to hysteria – in yet another murder story. Mr Hyde had given London its first fictional psychopath, and medical theories of the Ripper as a gentleman-by-day, murderer-by-night, seemed to have offered a real-life version of Hyde. Now the stars of London’s theatre, Ellen Terry and Henry Irving, were starring as the ascendant, murderous Macbeths, pushing the orthodoxy of the Victorian power couple to its limits. As the Pall Mall Gazette put it, it was ‘Horrible murder without. Horrible murder within’.

AGAIN, this might not seem EXCEPTIONALLY FESTIVE. And yet, researching this foggy, mysterious Christmas for my first book (if you want more, try Chapter 2) developed my obsession with Victorian periodicals. I hope you love them too – in any case, welcome to Advent 1888.

Christmas Books (Pall Mall Gazette, 1 December): aspirational parents were recommended such ‘books for Boys’ as Joseph Hatton’s Captured By Cannibals: ‘Though the book is a work of imagination, “there is not a single incident” – so Mr. Hatton tells us on the authority of actual travellers – “which might not have happened”‘. Captured by Cannibals included some ‘very spirited drawings’. Also praised was Tom’s Nugget by Professor J.F. Hodgetts of the Sunday School Union, in which the hero ‘meets some very rough customers in the bush, and passes through several thrilling adventures, which the author graphically describes. A fine moral tone pervades the book’. A book on Juvenile Literature As It Is surveyed Victorian children, revealing that ‘It is notable that the girls should read the Boy’s Own, while not a boy admitted preferring the Girl’s Own‘ (Pall Mall Gazette, 15 December).

Madame Mariette D’Auban was advertising for ‘Ladies of the Ballet, for Good Christmas Engagements, London and Provinces’ via her academy in White Hart Street, according to the Era (1 December). By 10 December, a festive-feeling Pall Mall Gazette was acclaiming the fashionable Christmas cracker as the ‘one glittering article, light almost as air, and uniting in it more colours than the rainbow, which pushes its way every year more and more to the front among the charming trifles without which no merry Christmas is complete’. Praising the factory of ‘Mr. Tom Smith […] in Wilson-street, E.C.‘, the Gazette singled out ‘the “Palmistry cracker,” […] each cracker containing a diagram of a hand on which the various lines which are fraught with meaning are clearly traced and explained in rhyme’.

The Guernsey Star, meanwhile, waxed pragmatic over the Christmas card: ‘The Christmas card so thoroughly suits an age which, though very busy, has very definite notions on taste, that we need not wonder at its popularity. From being a fashion, it has become something like a national custom […] On the whole, the Christmas card industry is a decidedly creditable offshoot of the artistic movement which is doing so much to disseminate sound views on colour, design and workmanship among all classes of our population’ (Star, 11 December). Meanwhile, ‘the annual Christmas sale of fat stock, the property of the Queen’ saw cross-bred lambs fetch 125 shillings per head at Windsor (Morning Post, 13 December).

Charitable appeals were everywhere. On a single morning – 15 December – the front page of the Morning Post gratefully acknowledged subscriptions for the Royal Albert Orphan Asylum, the British Home For Incurables (slogan: ‘HELPLESS! HOPELESS! HOMELESS!’), the ‘Midnight Meeting Movement’, and Chelsea Hospital for Women (this was in amongst the usual amazing mix of Victorian adverts, including for ‘a thoroughly good Select Finishing School and kind Home near the Crystal Palace, where [an Officer’s] delicate daughter has recently been’). 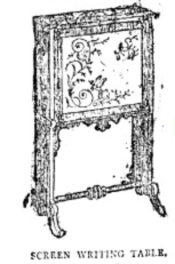 But above all, the public wanted to know what celebrities would receive for Christmas. The Duchess of Connaught had received ‘an umbrella with a solid silver and enamelled handle set with a valuable gold watch’, while the lucky Princess of Wales was due to get a writing table ‘of mahogany and marquetry’, which cost £86.

Then as now, ‘Dolls could be had up to any price’, with the very best dolls’ house, ‘a decent detached villa for a ladylike doll’ costing £12, including kitchen fires ‘lighted by small spirit lamps’.

Celebrity tastes in perfume were also key, and it gives me great joy to end with two of my favourite Victorian ladies: Lillie Langtry and the Lyceum Lady Macbeth herself, Ellen Terry:  ‘Ellen Terry and Mrs. Langtry both like opoponax, the scent sold by Piesse and Lubin in New Bond-street, who supply Mrs. Gladstone with her fumigating ribbon and the Queen with frangipanni’. Oponomax was a type of sweet myrrh popular with Victorian perfumers, and ‘Bouquet Opoponax’ (recently reconstructed in New Jersey) had become a bestseller for Piesse and Lubin. A similar scented candle is available from Diptyque!

Poor Mrs Gladstone. Fumigating ribbon doesn’t sound as nice as opoponax, or frangipanni. Let’s hope Mr Gladstone took some time off from rescuing prostitutes and ballet dancers (no, really) to buy her some perfume of her own.

Dr Sophie Duncan is Fellow in English at Christ Church, University of Oxford. She works regularly as a historical advisor and as a dramaturg for theatre, TV, radio and film. She likes theatre, detective fiction and cocktails. View all posts by clamorousvoice

2 thoughts on “Advent 16: a Victorian Christmas”