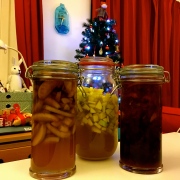 Recipe: equal parts brandy and vodka; apples; as much sugar as seems plausible; 1 stick cinnamon; 1 star anise; twice as much nutmeg.
Maturation: 6 weeks.
Appearance and Colour: sandalwood; simmering; amber; every Medieval picture of St Joseph
Bouquet: church pews; alcoholism; The Forest Primeval, fruit (?)
Mouthfeel: Scathing, with hints of huntsman; Signs You May Be Dying In A Victorian Novel; sombre, with notes of Heathcliff; holly; the Bayley poem where she gets locked in a trunk; standoffish ghosts; the theory and practice of a ‘family retainer’
Finish: It was Christmas Eve, babe/In the drunk tank

Recipe: Cranberries (1 pkt thereof); the zest of three clementines and then the juice because you got bored; enough vodka to cover all of that; Some Gin; 1 stick cinnamon; 1 nutmeg (grated); some marmalade; it’ll probably be fine
Maturation: 6 weeks
Appearance and Colour: Ribena’s trashy sister
Bouquet: plausibility; wassail; polka; Dita Von Teese in Zac Posen Pre-Fall 2018; any Robert Graves poem; My Barbie Kremlin; syrup; The Christmas Candle
Mouthfeel: silken; festive; would not be out of place at Old Fezziwig’s Christmas Party; frolicsome, with hints of vodka
Finish: I Wish It Could Be Christmas Every Day