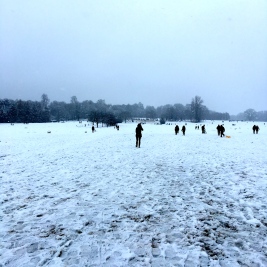 Obligatory festive stomp to South Park. Remaining undergraduates have bought up Tesco’s baking trays for sledges; small dogs in dog-Barbours circle. One northern slope has been designated best for sledging; a husky howls and then barrels off into the flurry.

Subsequent festive stomp round the St Mary & St John Churchyard: lucky wife gets to join me on never-ending quest to locate grave of grocer’s wife who murdered entire family in 1909. Enormous teenage snowball fight develops on western side of graveyard.

Make chilly progress down Manzil Way. Pass the East Oxford Health Centre, surely the only health centre in Britain with its own kebab shop on the ground floor. Behind the mosque, the Asian Cultural Centre is running a Christmas Mina Bazaar which, although much incommoded by snow, includes many small Asian children in Christmas jumpers, colouring in pictures of festive trees and snowmen. For £1.50, eat enormous bowl of chana chaat; try to answer organisers’ question ‘Is it spicy enough?’ without tears. Promise to come back for the Women’s Festival in March. Downstairs, see the burned-out oven from Mrs Smith’s Oxford Community Soup Kitchen; the oven exploded some weeks ago after twenty-five years of service – for a video about Icolyn Smith’s soup kitchen, watch the video below.

Back on Cowley Road, one of the unclassifiable quasi-hardware stores is selling plastic sledges for £12 each. A slowly-cruising, very ancient car boasts a snowman on the actual bonnet. A boy in football-strip pyjamas has been locked out of his shared house, to the great joy of onlookers and indeed his housemates. A snow-plough gritting van zooms down the road towards Cowley centre, plough well above the ground and no grit spraying.

When we return to the front of the flats, a group of boys is building a snowman on a sledge, complete with hat and wine bottle. They are ecstatic to be noticed. The snowman’s name is Inigo, after a friend who is apparently ‘a bit of a wino’ and ‘has been to Siberia’. When I ask if they’re students (they are implausibly pink-cheeked and wholesome), they say ‘Yes’ and ‘Well, sort of’, then confess to being sixth-formers at a local school (the snowman’s name should indicate which). They pose with alacrity for photographs and would probably do so for hours.

Tomorrow it’s library times to read about severed heads and painted faces (oh yeah), but until then, enjoy a much more serene version of snow-based fun with this gorgeous song from the best Christmas film not to feature Muppets, White Christmas (1954): ‘Snow!’.