This afternoon, about 2,000 people gathered by Oxford University’s Sheldonian building for a peaceful demonstration in support of the Syrian refugees, showing that refugees are welcome in Oxford.

The demonstration was chaired by Mark Lynas. A speaker from Oxfam, Dr Hojjat Ramzy of the Oxford Islamic Information Centre, Asylum Welcome, Emmaus Oxford and other charities spoke, as well as current and former asylum seekers from Syria, Eritrea and Afghanistan. The head of Oxford City Council confirmed that Oxford would be welcoming refugee families, and called on the government to make funds available to expedite the process. 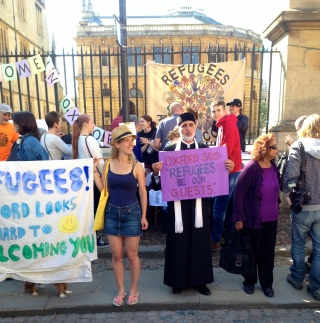 general election, before publicising the national day of action next Saturday. The author Mark Haddon called on Britain to “be more German”, after crowds in Munich applauded refugees arriving at their railway station.

If you want to help the refugees – including those already in the UK, who are not allowed either to work or claim benefits – the consensus among the charities was that there are three preferred things to donate at this stage:

ACCOMMODATION, either as a host to Syrian refugees or as a foster parent to unaccom

panied refugee children. A representative from the charity Homes For Good spoke about how his organisation is enabling people to become foster parents to Syrian refugee children who will shortly arrive in this country. For more information, go here. If you could offer a spare bedroom to an adult refugee or a refugee family, Oxford City of Sanctuary wants to hear from you.

MONEY. Donating goods is excellent but, like all the major charities campaigning for financial aid (MSF | Red Cross | Save The Children | Oxfam etc.), Emmaus Oxford is requesting cash donations so they can bulk-buy goods to take to Calais at the end of this month. Asylum Welcome, who run all kinds of schemes in Oxford from English lessons to youth clubs, are also desperately in need of funds.

SKILLS. If you can teach English or translate, both the Oxford Syrian Refugee Helpline and Oxfordshire’s Asylum Welcome need your help. It seems to me that every other Oxford resident has a TEFL certificate mouldering or sparkling away in their CV – stronger English language skills make negotiating life as a refugee in the UK easier and less daunting, helping families integrate and access the resources they need. Could you give a couple of free lessons a week?