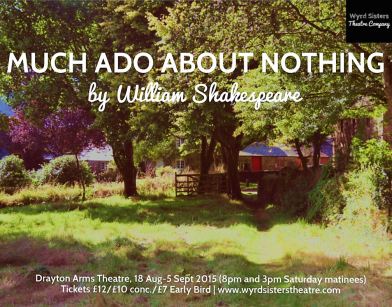 It’s increasingly clear that, for the new generation of Shakespearean actresses, the world of girls is not enough. Whether it’s Jade Anouka’s Hotspur at the Donmar, Pippa Nixon’s Bastard at the RSC, or Maxine Peake’s electrifying Hamlet at the Royal Exchange, women are building their careers by reinventing Shakespeare’s heroes. This is also the case for Wyrd Sisters, an emerging theatre company who, pleasingly, take their cross-casting policy in both directions. Thus, their production of Much Ado About Nothing, currently running at the Drayton Arms’ studio theatre (Old Brompton Road, SW5), we have a steely Leonata, played by Christina Balmer; a pugnacious Dogberry (Wendy Morgan), a skittish Ursule (Stuart Murray), and, most strikingly, a Claudia whose flowing hair and maroon beret make her look like she’s stepped straight out of Our Girl (Freya Alderson).

This contemporary, Anglicised Messina is somewhere between stately home and pub garden, where the returning soldiers booze on Somerset cider, strum guitars and plan the odd lesbian wedding. Leonata is a middle-aged hippie, poshly relaxed about her daughter’s sexuality, and then all nails and teeth when her wedding-day shames the family. Don Pedro, Claudia, Benedick, Don John and co. remain in fatigues, boots and berets for much of the play: the programme stresses that they are just back from Iraq. This is perhaps a poor fit for this cheerful gang of youths, who are prone to skinny playfighting and seem more like teammates than scarred veterans. The military background to Much Ado has, after all, never born too much scrutiny (the soldiers seem more Austenesque militia than Band of Brothers, and the emphasis on Operation Telic casts a chilly shadow over Balthasar’s carefree announcement that the combat has killed ‘But few of any sort, and none of name’ – Iraq or not, the subtext remains ‘So that’s all right, then’.

Charlie Ryall’s Beatrice, with her short, ruffled hair, baggy t-shirts and uncompromising stance, seems more like a soldier than Claudia: which is just as well, because of the two, it’s clear which woman lives in a state of constant warfare. This is a scornful, angry Beatrice, simultaneously world-weary and dramatically childish. But she wheels from attention-seeking brat to kind woman, especially when Nicholas Oliver’s Don Pedro claims her hand.

She is ably matched by David Paisley’s Benedick, a sweet-faced teddy bear of a soldier, whose cruelty is cheek and whose doting affection is very readily summoned by the gulling scene. Ryall and Paisley head the cast very effectively; Paisley, in particular, pushes the story on through his soliloquies, and got the biggest laugh of the night in his muffled ‘Fuck off’ to the Boy who returns to expose his hiding place as he eavesdrops on Claudia, Leonata and the Prince.

But the show’s great surprise is Hero. A conventional Hero switches from happy dolly to sad dolly and back again: an inevitable step on the dismal downwards path to Desdemona. She has more to say than Mariana, but less to do than Celia; she is married off worthlessly without having the opportunities of a Helena or an Isabella first, and in all of the Shakespearean canon, there can be nothing less appetising than playing second billing to Beatrice, who is worth a play on her own. Lucy Green transforms a thankless role, giving Hero all the wit, pugnacity and intellect you’d expect of Beatrice’s cosseted cousin. Hers is the great succession of the church scene, when Hero’s long and difficult silences are filled with the emotion of a young woman who’s seeing hell before her eyes. As each new blow falls, Green’s distress grows, as we realise with her what this betrayal of love, loss of family, and wretched humiliation means.

When removed from Renaissance dress, it’s harder to believe that Hero could really be seen ‘dying […] Upon the instant that she was accused’, but Green’s alternately white and flushing face, and step-by-step panic, make the possibility horribly real. Hers was the only convincing collapse I have seen. Leonata, the doting mother who rejects her daughter, is nastier than any father could be, reminding the audience why Lady Capulet’s rejection of her daughter is, in a few words, always more devastating than Lord Capulet’s long harangue. Beatrice’s response also accentuates the horror. Rather than ranting, shouting, or forcibly dragging Hero away from her tormentors, Ryall huddles down beside her cousin in silence. Leonata’s savagery can’t be stopped. Beatrice and Hero bow their heads, curl together, and, like children under violence, wait for it to be over.

Ryall also gives the scene one further moment of tragicomedy. Benedick’s sudden declaration of love once the pair are left alone in the chapel can be played with joyful effervescence, the revelations pealing out in relief after the agony of the preceding moments. This is not like that. After witnessing Claudia’s cruelty and experiencing Leonata’s brutality, when love seems the most poisonous thing in the world to Beatrice, Benedick thinks it’s choice and appropriate to present her with his heart. A deadened, exhausted Beatrice stares across the stage, learning in her dissociated mind two things: first, that the person she loves most in the world loves her back, and second, that he doesn’t understand her at all. This is the loneliest Beatrice I have ever seen, and thanks to Ryall, it will be impossible to forget that quality in the character.

That chilling revelation aside, this is not an especially dark Much Ado. The physical comedy is sometimes very sharp, with spilt drinks, spit-takes and pratfalls underpinning the wittiness of the words. Stuart Murray, doubling Ursule and Friar Francis, justifies his existence a thousand times by turning the Friar (outside the history plays, Shakespeare did not excel at writing clerics) into a pitch-perfect imitation of Blessed Miles Jupp. Biased as I am, writing this admidst the flower crowns, Corinthians, and Natural Tan hosiery that comes from being twenty-eight and permanently on the wedding circuit, but dear Lord, that was funny. As Murray’s excellence suggests, this production has a stunning supporting cast. One disconcertingly good performance comes from Louise Goodfield, who, in the best cross-casting of the night, has made the startlingly turned Don John’s lackey Conrad from a standard stooge to a fully-fledged Lady Macbeth. Hers is a stunningly evil little Machiavel, in sexual thrall to Don John, but equally happy to make mischief for Claudia long after Borachio’s conscience cracks.

Some pacing issues hamper the speed of the piece, particularly in the notoriously difficult sequences with the Watch, and the instrumental music occasionally prolongs the scene changes, rather than covering them. But the final scrap between Beatrice and Benedick, respectively nauseated and gooey over each other’s poems, is tremendously satisfying, and the final rendition of ‘Sigh no more’ as sunny and bittersweet as one could wish. This is a company worth watching, in one of London’s best studio theatres. You don’t need to be in Edinburgh to see excellent theatre this summer – catch Much Ado About Nothing at the Drayton Arms, on stage now until 4th September.

Dr Sophie Duncan is Fellow in English at Christ Church, University of Oxford. She works regularly as a historical advisor and as a dramaturg for theatre, TV, radio and film. She likes theatre, detective fiction and cocktails. View all posts by clamorousvoice

2 thoughts on “[REVIEW] Much Ado About Nothing, Wyrd Sisters Theatre, Drayton Arms, London”