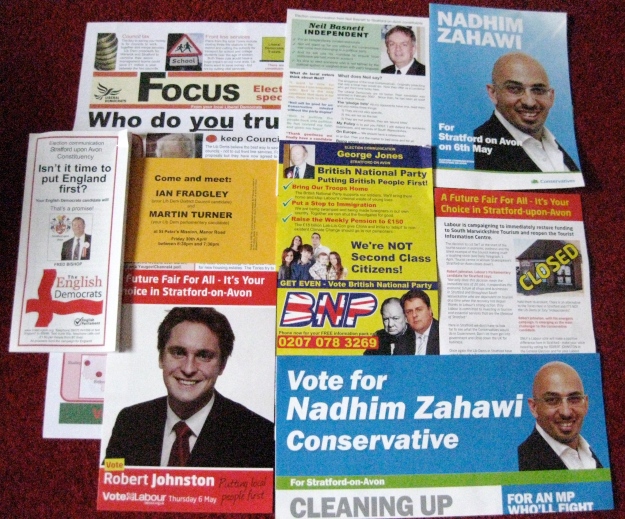 My prized collection of spin, hope and lunacy.

The John Johnson Collection, the Bodleian Library’s Archive of printed ephemera, are collecting material related to the General Election. If you have received any leaflets/postcards/scratch ‘n’ sniff perfume samples from your PPCs, don’t throw them away! Election ephemera can be sent direct to the relevant librarians – email me at clamorousvoice [at] gmail [dot] com to learn more.

PPCs for Stratford-upon-Avon (as of 29th April):

What I’ve learned about these candidates, so far

In February, the blogosphere claimed that Zahawi had received “the promise of a safe Conservative seat” in Stratford – “ultra-safe”, according to the Voter Power Index. For a while, Jeffrey Archer’s crony looked set to become the Midlands’ latest British Asian Tory poster boy, along with the charismatic Allah Ditta, Worcester’s first Asian Mayor. Now, however, Independent Neil Basnett has frothed up to split the right-wing vote. He’ll do well – if Stratford’s unhappiest Tories are too blinded by bigotry to notice his lack of policies.

Meanwhile, Rob Johnston’s got himself a PPC webpage – even if it is empty – and was sighted at Alcester Grammar School. A schoolfriend of mine claims he bought her a drink and was nice (perk up, Johnston, I agree being given S-on-A to fight is shitty, but there’ll be another election soon and important people are watching). Martin Turner‘s a Baptist and knows a sheep farmer. Vince Cable likes him (Turner, not the shepherd). Karen Varga may just be a conspiracy theory. No, wait, she has a blog. The most recent entry starts “Weapons kill – no seriously“. I think I’ll vote for the sheep.

I can’t vote Labour. I think the Liberal Democrats (and, realistically, a coalition government/hung parliament) are our best hope for a) change and b) the destruction of the New Conservative dream. I just hope Nick Clegg doesn’t meet any bigots in the forthcoming week. I bet Murdoch wouldn’t have broadcast Cameron with his microphone left on.

16 thoughts on “Stratford-on-Avon PPCs: Zahawi, Johnston, Turner et al (and why you should save your spin for the Bodleian)”