Our theatre: looking towards the Herm in Merton Fellows' Gardens

Sunday was our photoshoot for Love’s Labour’s Lost. A friend of mine said later on her blog that she’d seen someone inexplicably dressed as a king in Merton Fellows’ Garden – it was Ed! Looking rather like his namesake Edward VII in beard and ermine, our Don Armado put up nobly with the heat (another sufferer was Eleanor Lischka, as our curate Natalia) while black-tied boys and girls in white frolicked about. I suspect some sort of Faustian pact to pay for the costumes – they’re all really gorgeous. I’m still not sure exactly what I’ll be wearing for Moth (parcels are arriving from Cheltenham shortly, so I’m told…) but v1.0 features a little cream jacket that (on closer inspection) turned out to have an interesting tag. Apparently Moth v1.0 was worn by an undergraduate Kate Beckinsane, playing Nina in The Seagull! Above is a picture of our theatre space as it looked yesterday – but for a 360 degree experience, go here and click on ‘The Herm’.

The proper images will doubtless be on Facebook soon, but above and below are some sneak previews. The shoot was so much fun – my last was spent freezing in a cellar while the shirtless leading man developped goosebumps. Our photographers were very well organised, and our four court ladies were gambolling about like something out of the Branagh Much Ado About Nothing. Of course, we had the classic photo shoot mishaps of one dress zip malfunctioning  – a certain actress had to keep facing the front – and a gaggle of excited tourists who may have ended up in one of the shots. Meanwhile, enjoy the splash, email for tickets &- oh, I nearly forgot. We now have a co-director, Ellen Davnall – a brilliant addition to the company. She’s also a Mertonian, and will be a huge asset to the company. Our MD is John Murton (the best pun will be rewarded with chocolate) and our Marketing Officer, Yasmin Mitha. Just please let the weather be like this in 8th…

Ed nobly does not die of sunstroke. Scout drops unconscious at apparent resurrection of Russian Tsar. 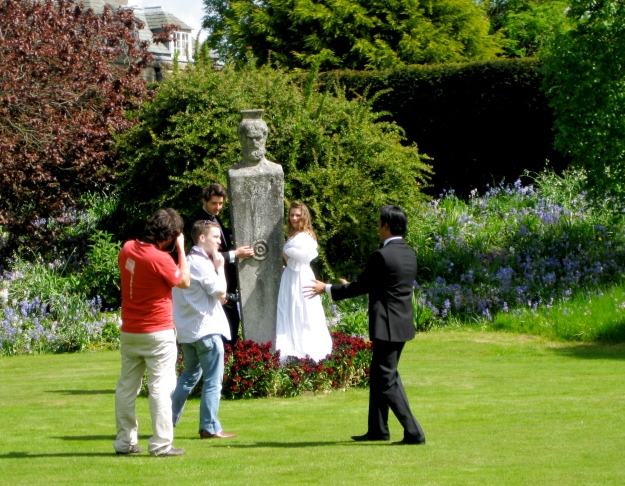 The director directs, the photographers photograph, and Herm is not amused.

Courts of France and Navarre practice their loving looks. Emily and Robert horrify with their general beauty.